Last weekend, a friend who I have been getting into calisthenics training, decided that he wanted to put up his own pull up bar so that he can train at home, without having to take a trip to the trees. 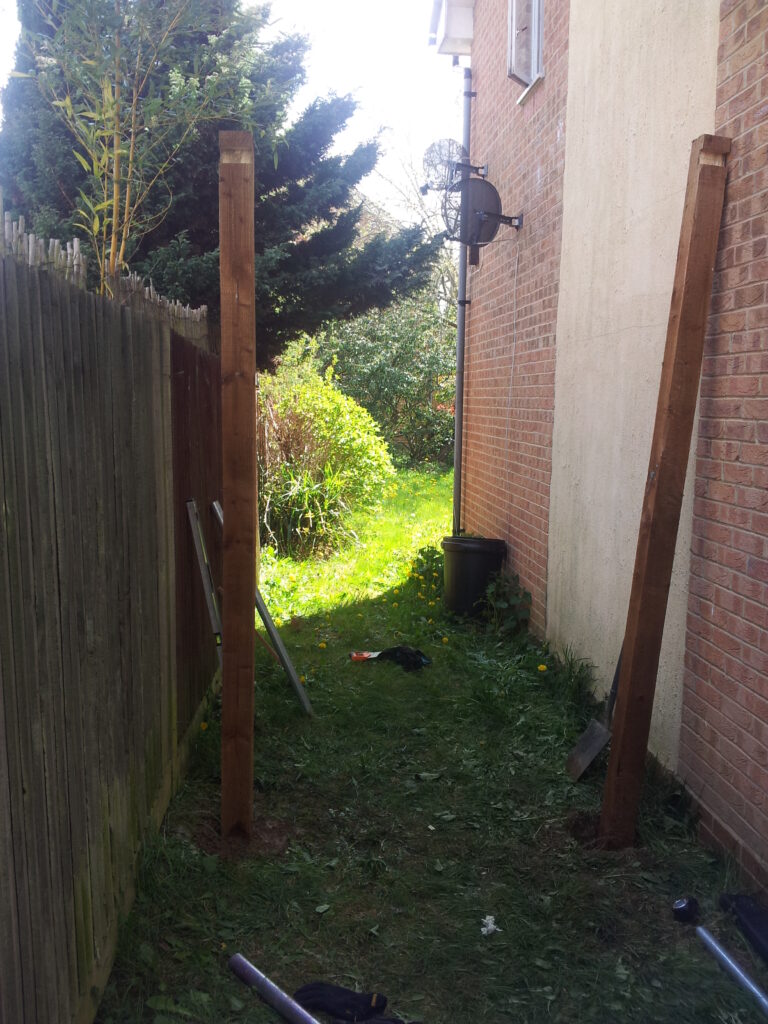 It was a really fun project and it only took a day, without much fussing about, and now we can work our pull movements during the week easily, without having to travel!

It’s easy to train push movements and isometrics at home, but finding a bar that you can hang comfortably from can be a bit more difficult.

As it happens, building this bar only cost about £65, and a Saturday, now we have a pull up bar forever!

If you want to make your own pull up bar in your garden or round the side of your house, we will walk you through the process to get it done!

If you want to make your own bar you can, we used scaffolding for ours, it is easy and quite large. A lot of people would suggest something thinner maybe 1 ½” rather than a 2” bar, simply because it is easier to train on, but using a thicker bar will only help train your grip more, right?

Surely it’s better to train on the harder one . . .

Regardless, that is what we decided on.

What You Will Need:

How To Build Your Own Pull Up Bar

So we built the Pull up bar in about 5 hours but it could be done a lot faster if we had planned it a bit better.

Here are the steps to do it:

What you need to do is measure where you want the bar, we just used the scaffolding on the floor, and mark out a square around each end where the posts will go.

Next, mark out where the bar will go on the posts, saw them in and chisel the block out flat.

You also need to mark how deep into the ground you will drop the wood, to keep it stable in the ground. When we were deciding on this, I mentioned we would want the bar to be slightly higher than we can reach, so that we can do a full dead hang, we measured up against the bar and marked about 2 ft 6 inches to measure our hole to.

The next part is to dig the first hole, you want to make it larger than the post to leave room to set it into the ground. We gave about 5 inches around the posts to give plenty of space.

Make sure the hole is good and bash the post into it to get it set, then measure it up with a spirit level to check it is set flat.

Once you have the first post in, grab a bag of postcrete, half fill the hole with water, and fill it up, keep the spirit level against the wood so you can check it is upright, or you could end up with wonky bar.

Once you have set the first post, check it again on the floor with the bar. You’re better off spending the extra 5 minutes to check it now, than find its out of line later.

Now you have to dig the second hole, and set the other post. As we were setting it in, we put the bar up, and fixed it in place with some zip ties so that we could ensure the bar was straight. We used the spirit level and the cuts in the wood to make sure it was perfectly square before we filled the hole with postcrete.

Next was drilling the bar. Before we took it down off the posts, we marked the edge of the wood with a pencil so we had margins to work within. We used these to get a rough centre point in the scaffolding and used a power drill to pilot a hole, and then used the larger bits to cut it to size. You need to make sure these are done opposite and at the right angle or you could end up with serious problems when you are fitting it to the post.

Ours came out with about a 5 degree variance, so we used the wood bit to cut the holes in the post through the scaff holes, that way they would line up perfectly regardless of them being slightly misaligned.

Once they were drilled out, it was just a case of bolting them on and leaving them until the next day to give them a go!

How Did It Go?

Making the bars was great fun, and so rewarding now. Now they are built they are there to stay, and we can train our pull movements and hangs and levers without needing to go to the trees, that means evening sessions not just weekends!

What We Would Do Differently

Having used the bar a few days, it is clear we need to support one side a bit more, so to stabilise it we are digging in some more posts on the lower side. In hindsight, we should have checked to see if there was a thicker post before, but in our ignorance we didn’t think it would have much give in it.

The posts aren’t that wobbly, and for hangs and pulls it is fine, its only when you get up on top of the bar that it becomes a problem, a little more stability will help keep it solid when you’re on top.

Loved this? Spread the word

Hey, I'm Rhys and I'm the Coach at MoreThanLifting I am a Personal Trainer, Gymnast & Calisthenics Coach from London. I help people get into great shape with bodyweight strength and skill training.

Change The Way You Train!

Get Started Today!
We use cookies to ensure that we give you the best experience on our website. If you continue to use this site we will assume that you are happy with it.AcceptPrivacy policy